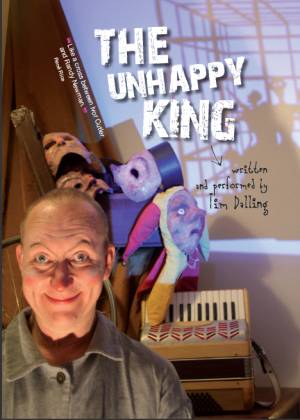 Sometimes the accordionist clown from The New Rope String Band is let out on his own. Dare you join him for a romp through his imagination?

Not only will you voyage into the hilarious world of miserable kings, tortured jesters and the search for the happiest man alive, but you shall be tickled pink by his funky music and soaring songs.

In the first half, Tim performs The Unhappy King, a one-man show using masks, puppetry, shadows and music. In the second half, with his exuberant accordion and comic tendencies, he will woo you with his own songs and those created from poems by Louis MacNeice, Sean O'Brien and Julia Darling.

running time 2 x 45 mins. suitable for adults and children over 8.

He may ask you to sing along
You may laugh uncontrollably.
You may be momentarily overcome with emotion.
But do not fret or drop anything valuable.

Tim has years of experience as a musician, clown and actor in Kneehigh Theatre, Northumberland Theatre Company and Northern Stage. He continues to tour, nationally and internationally, with The New Ropes.

"A fairy story and morality play bristling with ingenuity, invention & lingering pictures. Tim combines his mastery of song, piano accordion, puppets, vacuum cleaners & pitchforks in a tale of the imagination whose audience whooped & swooned & gasped. About as good a one-man show as you'll ever see."

"That was the best piece of theatre I've ever seen."

"Like a cross between Ivor Cutler and Randy Newman"

"Jake Thackray meets Billy Smart's Circus and runs away with the cash register & the clowns. Tim's choice & treatment of contemporary songs - by poets Ivor Cutler, Julia Darling, Louis Macneice and from his own canon - pinned us to our pants with merriment, joy & awe. The man's gay abandon swept the room like an escaped Hoover."